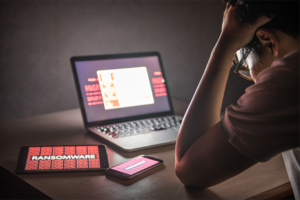 In the felonious field of cybercrime, it may seem impossible to pinpoint where cyberattack threats may resonate from. And while you may not be able to pinpoint an exact address of the person who’s holding your organization’s computers hostage via ransomware, there are three main categories of cybercriminals your organization may need to face. Whether or not you need to handle each, and subsequently how, are critical points of understanding to be aware of when creating an effective cybersecurity plan

Hacking activists, or hacktivists, are one of the more popular illicit online groups taking down corporate networks daily. Hacktivists aren’t in it for the money – their goal is social and political justice, which makes them some of the most dangerous online threats to organizations across the globe.

You may have heard of one of the most notorious hacktivist groups by now, Anonymous. Anonymous is a group of decentralized hackers with political and social motives, aimed at fighting political and social injustice they see in the world via comprehensive DDoS attacks. Their targets range from presidential candidates to banks they deem responsible for global economic inequality, and their decentralized nature makes them nearly impossible to track down.

Today, Anonymous still reigns supreme as a major hacktivist group but is also an inspiration to other hackers and hacktivists lurking across the web – which means it’s only a matter of time before even more, powerful politically motivated groups begin making waves in the cybersphere

If an illegal job pays well, there’s always going to be a criminal ready to step in and do it, and online crime is no different.

Many of today’s cyberattack threats are committed less by passion or devotion to a cause, and more by hackers-for-hire. These trained cyber-guns can handle most illicit tasks from implementing malware to holding computers hostage with ransomware or setting up bugs to siphon off information from sensitive databases.

Hackers-for-hire in real life aren’t like the movies — in fact, with cybercrime being such a growing trend for criminals across the globe, the world of hackers-for-hire is actually becoming pretty mundane. That doesn’t mean they’re less of a threat, however. Hackers for hire may lack the political or social drive of hacktivists, but that doesn’t make their job any less vital to the criminals they work with — and with their services readily in demand and easy to offer, they’re not going away anytime soon

One of the antagonists associated with cybercrime in recent news is the good old enemy of the state. It doesn’t matter if it’s Russia, North Korea, or China – every day, news stories fill our feeds with reports of world powers tinkering with the cyber-frameworks of fellow nations. Political and military hacking is old news, but attacks are not all politically charged in nature — in 2014, North Korea supposedly hacked Sony entertainment, meaning a nation of the world meddled into the inner workings of a private business.

In cybercrime, there is no international border to hide behind — any and all businesses can be a target, and not just from peeved former employees or hacktivists, but by paid professionals and event nation-states as well.

So why shouldn’t you worry about North Korea targeting your organization, or the latest group of hacktivists taking control of your servers? Because we’ve got you covered.

At NENS, we have decades of experience in protecting our clients from the latest and greatest cyber threats – wherever they hail from. Contact us today to learn more about our cybersecurity offerings to ensure your organization’s online security is held in the best hands possible.